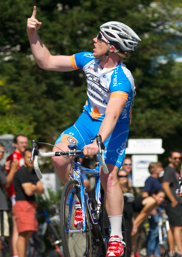 “Rocktape is delighted to be associated with Daniel, a rising star in the pro peleton, and Wouter, a well recognized member of the inline skating community,” said Rocktape CEO Greg van den Dries. “We’re excited to have them promote our message to the professional cycling and skating communities, and support our overall evolution as a company.” Holloway, a Bay Area native, holds multiple Track National titles, is a World Cup Bronze medal winner and member of USA Cycling’s national development team and 2012 Olymic hopeful. “I started using this type of tape while training in Europe,” said Holloway, a member of the Bissell Racing team, which is directed by Eric Wholberg and includes brothers Ben and Andy Jaques Maynes. “When it comes to kinesiology tape that is reliable enough for professional athletes. there’s really only one choice, and that is Rocktape.”

“After trying out different kinds of tapes I found that Rocktape was the only tape that can withstand an explosive 200m start or last a full marathon,” said Hebbrecht. “Since I race in hot weather and rainy conditions, I need a tape that I can count on!  When I apply Rocktape, I am guaranteed my tape will last.”

Dr. Amor Adams, a member of the 2008 Olympics Team USA Sportsmedicine Staff, works with Hebbrect in preparation for his races. “As a sportsmedicine specialist, I need to provide athletes with all the advice I can give them to perform better and achieve their goals. Rocktape has been an integral part in the treatment of injuries, enhancing performance and preventing further injury. The product is suitable to different sports and levels of athletic ability – whether one is an olympian, a professional athlete or a weekend warrior, Rocktape works.” As part of the company’s mission to deliver high-quality products that meet the needs of all athletes, Holloway and Hebbrecht will collaborate with Rocktape’s research and development team in the design of select merchandise to better serve the cycling and inline skating markets.

“When Rocktape approached me and asked me to help test their improvements I was intrigued,” said Holloway. “I always felt that there was room for improvement and Rocktape hasn’t disappointed.”

ROCKTAPE is headquartered in Los Gatos, California. ROCKTAPE is used by medical professionals to treat sports injuries, and can also be purchased at leading running and cycling shops, Fit 2 Run, Road Runner Sports and Sports Basement locations and online at www.rocktape.com. ROCKTAPE comes in eighteen different styles and colors and retails for $20 per roll. The company also offers bulk rolls, and team discounts are available. Contact admin@rocktape.com for more info.

Find us on Social